by Press Release
in Bitcoin
0


Data shows most mining companies have outperformed Bitcoin so far in the year, largely contributed by the rising BTC miner profits.

Daily Bitcoin Miner Profits Have Risen To $62 Million This Week

As per the latest weekly report from Arcane Research, miners have seen another rise in the daily profits this week. They are now raking in $62 million each day.

Here is a table that shows all the data related to the revenue of Bitcoin miners over the last week:

As the above table shows, the transaction fees per day has gone up 3.64% in the last seven days. However, fees still only make up for 1.6% of the total mining revenue, a meagre amount compared to what it has been historically.

The reason behind the low fees may be attributed to the growth of the Bitcoin lightning network, where the smaller transactions have migrated, reducing block demand on the chain.

The total daily mining revenue has seen a 3.5% rise in the period as miner income now stands at $62 million per day.

Mining Stocks Have Outperformed BTC In The Year 2021

So far in this year, most major mining company stocks have outperformed Bitcoin. MARA is up 521% in the period, while HUT follows with 380% in gains.

RIOT managed 160% in positive returns, which although significantly less than the other two, is still higher than BTC’s 120% in profits.

The biggest reason behind mining stocks performing this well has been the large Bitcoin mining revenues recently.

Below is a chart that shows how the major mining companies have fared this year so far:

Looking at the graph, Northern Data observed much lesser gains than Bitcoin as its returns stand at just 18% right now. Cipher Mining performed even worse as investors are currently 16% in the red.

Due to the high performance of stocks such as MARA and HUT, some investors are finding mining companies to be an alternative way of getting BTC exposure. Out of all the companies, MARA seems to be currently the most highly correlated with the price of the crypto.

At the time of writing, Bitcoin’s price floats around $60.5k, down 9% in the last seven days. Over the past month, the crypto has gained 0.3% in value.

The below chart shows the trend in the price of the coin over the last five days. 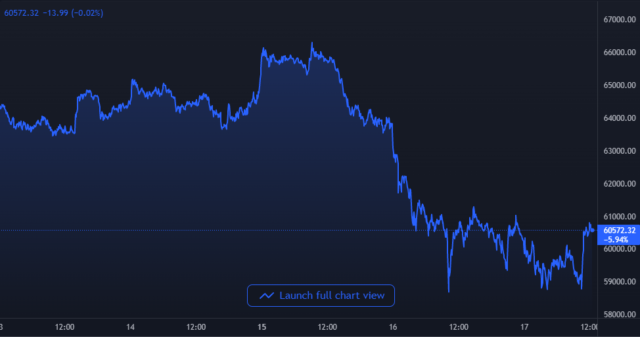 Is the Decentralization in DeFi an ‘Illusion’?

Square Funds Designer to Make Crypto Wallets Usable by Anyone

Landindex, the Metaverse Land Data Aggregation and Analysis App is Available on IOS and Android.